What is submerged soil– an assignment : 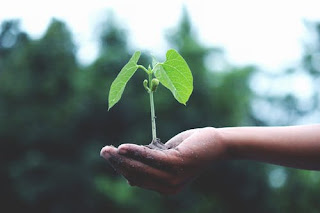 What is submerged soil?

Submerged soils are soils that are saturated with water for a sufficiently long time in a year to give the soil the following distinctive grey horizon resolving from the oxidation-reduction process.
1. A partially oxidized and horizon are high in organic matter.
2. A module zone in which oxidation and reduction
3. A permanently reduced zone which is bluish-green in colour.

Submerging a soil brings about a variety of electrochemical changes.
These include,
1. a decrease in redox potential.
2. an increase in pH of acid soils and a decrease in pH of alkaline soil.
3. changes in specific conductance and ionic strength.
4. drastic shifts in mineral equilibrium.
5. cation and anion exchange reaction.
6. sorption and desorption of ions.

When the soil has submerged the reduction of soil takes place and the reduced soil contains reduced counterparts of NO3–, SO42-, Mn4+, Fe3+, and CO2: NH4+, H2S, Mn2+, Fe2+, and CH4. The reduction of different soil components takes place in a sequential form; nitrates are reduced first followed by manganic (Mn4+) and so on.
Oxidation-reduction is a chemical reaction in which electrons are transferred from a donor to an acceptor. The electron donor losses electrons and increases its oxidation number or is oxidized, the acceptor gains electrons and decreases its oxidation number or is reduced. The source of electrons for biological reductions in organic matter.
The driving force of a chemical reaction is the tendency of the free energy of the system to decrease until, at equilibrium, the sum of the free energies of the products equals that of the remaining reactants. In a reversible oxidation-reduction reaction, this force can be measured in calories or in volts. The change in free energy, âˆ†G, for the reduction,
where (Red) and (Ox) are the activities of the reduced and oxidized species and âˆ†GÂ° is the free energy change when the activities are unity. Converting calories to volts using the relationship,
From the following equation,
in which E is the voltage of the reaction, E0 is the voltage when (Ox) and (Red) are each unity, and F is the Faraday constant in heat units. If E is measured against the standard hydrogen electrode, it is denoted by Eh. Equation (2) then becomes.
Eh is a quantitative measure of the tendency of a given system to oxidize or reduce substances. Eh is positive (+ve) and high in strongly oxidizing systems; it is negative (-ve) and low in strongly reducing systems. There is no neutral point at pH. Any chemical reaction which involves the exchange of electrons will be influenced by redox potential (Eh).
When a soil (aerobic) is submerged, a sharp drop in the potential will observe and within a few weeks negative (-ve) potentials are observed in most of the soils. The submerged soils may exhibit potentials as low as -300 to -400 mV depending upon the type of soil organic matter, Fe and Mn content, a pH and temperature i.e. presence of poisoning system and bacterial potentials (Fig 22.2).
study of redox potential d will help us in better understanding w of the rice environment which influences the expansion, nutrition, and yield. Soil reduction in and of itself isn’t harmful to the expansion of rice unless the worth of redox potentials (Eh) is simply too low for sulfide formation. However, redox potential influences the rice cultivation under three conditions counting on the soil and water management practices:

(i) The highly oxidized state initially as in uplands where NH4â€” N is also oxidized to NO3â€” N and should leach or denitrify. The oxidation of organic residues results in the liberation of CO2, NO3, and SO4, etc. the supply of iron, manganese and phosphorus are very limited since they’re present as their oxidized forms (Fe3+ and Mn4+) and phosphorus as insoluble iron and manganese phosphates. The pH is also too low resulting in aluminum toxicity.

(ii) Healthy reduced state where NH4â€”N is present in large amounts and is absorbed on soil colloids resulting little leaching and denitrification losses. the supply of iron will increase thanks to the reduction of Fe3+ to Fe2+. Generally, H2S won’t form at this stage, but if it forms, it’ll precipitate as FeS (iron sulfide).

In this state of soil reduction, pH is around about 6.5 which is optimum for the supply of all the macro- and micro-nutrients.

In this situation, there is also the appearance of iron toxicity due to its maximum concentration. Sulfide (S2-) ions may accumulate and cause sulfide toxicity to rice roots. The generation of organic acids (butyric acid, propanoic acid, etc.), ethylene, mercaptans, organic sulfides, etc. will found which is able to create problems for the rice plant (Fig. 22.3).

, the low redox potential (Eh) resulting from soil submergence, influences the price growth which is as follows:

1. a coffee Eh harms germination and seedling emergence but not growth of the well-established plant,

2. Low Eh destroys NO3– â€”N but favors NH4+ â€”N accumulation and biological process and hence result in a net increase within the soil nitrogen regime,

4. It causes harmful effects on rice by decreasing the supply of S, Cu, and Zn.

The general sequence of reduction is shown in Fig. 22.4.

So, for the determination of pE value of redox potential (Eh) divided by 0.0591 will give the pE value.

When an aerobic soil is submerged, its pH decreases during the primary few days reaches a minimum, and so decreases asymptotically to a reasonably stable value of 6.7-7.2 some weeks later. 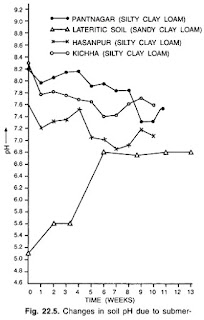 Changes in Soil pH thanks to Summer

On the opposite hand, the decrease in pH of alkali and calcareous soils could also be because of the discharge of a sufficient amount of CO2 during the decomposition of organic matter. The increased concentration of CO2 produces hydrogen ions (H+) reacting with soil water and thereby decreases the soil pH. 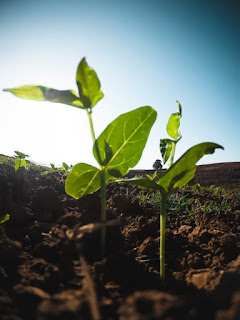 The pH of submerged alkali and calcareous soils are generally governed by the system Na2CO3â€” H2Oâ€” CO2 and CaCO3â€”H2Oâ€”CO2 respectively.

In fact, acid sulfate soils low in iron might not attain a pH of over 5 even after months of submergence. Organic matter magnifies the decrease in pH of sodic and cal. various soils. vasoconstrictive or the presence of nitrate (NO3–) retards the rise in pH.

The specific conductance of the answer of most soils increases after submergence; attains a maximum, and declines to a reasonably stable value, which varies with the character and properties of the soil (Fig. 22.6).

increase in conductance during the primary few weeks of submergence is because of the discharge of Fe2+ and Mn2+ from the insoluble Fe3+ and Mn4+ oxide hydrates, the buildup of NH4+, HCO3– and RCOO–, and just in case of calcareous soils, the dissolution of CaCO3, MgCO3 by CO2 and organic acids.

Besides, the rise within the concentration of calcium and magnesium could also be because of the displacement of ions, especially cations from the soil colloids by the subsequent reactions: 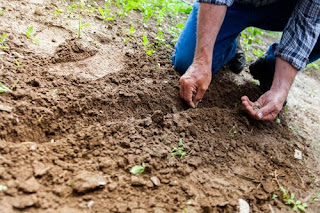 The decline after the most increase is principally because of the precipitation of Fe2+ as Fe3O4nH2O and Mn2+ as MnCO3. The decrease in the conductance of calcareous soils is caused by the autumn in the partial pressure of CO2(pCO2). and also the decomposition of organic acids. 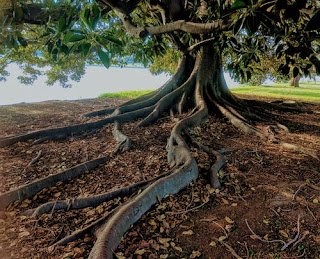 1. saturated with water for a sufficiently very long time actually.

I a very oxidized A horizon high in organic matter

iii a permanently reduced zone with a bluish-green colour

Ii during this the G horizon is blue or green.

I marshes are found in estuaries, Delta’s, and tidal flats.

ii it’s green if iron silicates are present and dark grey if parties are the most iron minerals.

I developed by cultivation practices of paddy ( includes puddling, leveling and water stagnation)

When fe2+and Mn2+reach the oxygenated surface. The surface of rice roots or the oxidized and precipitated together with silica and phosphate.

Formed from River, lake, and ocean

The sediments are formed from soil components.

The rice plant absorbs nutrients and grows under these specific complex conditions.

Generally systems of rice cultivation in India and particularly in province is classified into two major types:

(i) Semi-dry systemsâ€” where rice is grown primarily as a rainfed crop especially in uplands. The yields under such conditions are normally low,

ii) Wet-system practiced in low lands or where irrigation is accessible.

nextWhy does in any Government related task people have to give their left thumb’s fingerprint with signature?